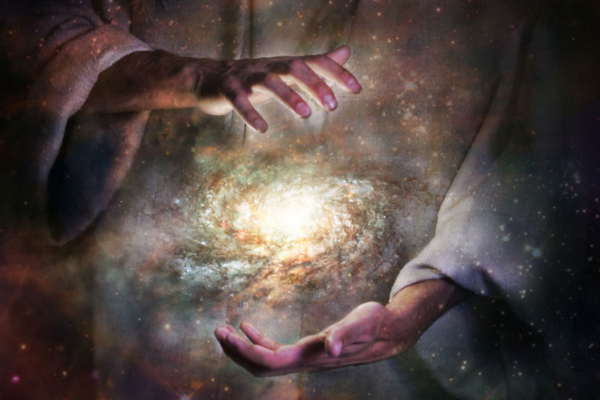 In my weekly skimming through Bible topics on line and stopping off on Wikipedia as I frequently do, I happened to pause on the topic of the relationship between religion and science. In the summary, I read a comment by John Habgood (Fmr. Archbishop of York- Diocese of NY). He essentially said that all that man really knows here is that the universe seems to be a mix of good and evil, beauty and pain, and that suffering may somehow be part of the creation process. Habgood held that Christians should not be surprised that suffering maybe used by God, given the symbol of their faith is the Cross. Granted we know from our reading that God permits suffering for His purpose.

I enjoy reading things like this with the new knowledge of scripture with which we’ve been blessed. Whenever I read such comments, the Bible filter is applied. Genesis 1:1- “In the beginning God created the heaven and the earth.” With all due respect to Mr. Habgood (he won’t get any from God – Acts 10:34), no mention of suffering in any of the creation “process.” We may take issue with the Cross as well or any other symbol (Ex. 20: 4-5).

Okay, so no suffering, the Cross came centuries later. So, what about the Earth and the Universe itself? I found an article on line that listed 7 theories of creation. SEVEN! They only dealt with the creation of life and not the universe itself. They ranged from Primordial Soup (we came from a prehistoric slime), electric spark, several other variations of equally entertaining concepts and one that by name sounds like a hedonistic travel agency, Panspermia. This is the theory that life was deposited here from outer space.

The most popular theory (outside of Creation) is the Big Bang. Aside from a funny sitcom, when you get into reading about the particulars of what is entailed in this theory, it may be nearly as laughable as its TV namesake but it will likely cause your head to explode unless you sit up late at night and read articles on celestial mechanics and quantum physics for fun. Keep in mind that Satan is hard at work and quite convincing in twisting truth (Dan. 7:25, John 8:44, Rev. 12:9).

Condensing the Wikipedia version, The Big Bang theory is the prevailing cosmological model for the universe. The Big Bang is the result of a singularity which is estimated to have occurred approximately 13.8 billion years ago. A singularity is a location in space-time where the gravitational field of a celestial body becomes infinite in such a way it does not depend on the coordinate system. This is simply a spherical coordinate system used in physics, assigning 3 numbers to points in Euclidian Space. The type of singularity predicted by general relativity is inside a black hole: any star collapsing beyond a certain point, would form a black hole covered by an event horizon. Writing out the formulas for these theorems would look like hieroglyphics. Without delving into the Schwarzschild radius and the Penrose-Hawking singularity theorems, I think you’re getting the idea of where I’m headed with all the “learned” folks who think they are smarter than God (Deut. 32:28-29, Job 32:9, Isa, 5:21, 44:25, Romans 1:22, 1 Cor. 3:19). All of the theorems I read contained words and phrases like “could, could also, may, might also, etc.” I also found it interesting there was no mention of what existed before to cause the Big Bang. For the most part, they all read like a supermarket tabloid.

I did read there are several physical laws or scientific laws that are universally accepted within the scientific community. These laws are found to be true, universal, simple, absolute, stable, and Omnipotent. These laws were originally referred to as the laws of nature dating back to the 17th century Europe and natural philosophers of the time such as Sir Isaac Newton. The modern scientific method which took shape around this time began to separate science and theology. With modern technology, Satan is having a field day. He has the church so polluted, planting seeds on alternative origins of God’s Creation is quite easy (Matt. 24:4, 2 Cor. 2:11, Eph. 4:14). Here’s a thought or a theorem…maybe they were put in place by the same one who wrote the Laws on stone tablets?

“I am Alpha and Omega, the beginning and the end, the first and the last.” Rev. 22:13 He has solved the issue of what was before and after. No singularities, no theorems. “In the beginning God created the heaven and the earth.” Gen. 1:1 God said it, I believe it.